True to the saying that bird photographers are a greedy lot (because they always want something more and better), I was not that happy with my shots last February 18 and wanted to go back. A new site discovered on February 19, that allowed closer captures, made the urge almost unbearable.  Fortunately, I have a loving and understanding wife who puts up with my addiction. So on Feb 21, I headed back to Infanta for another shot at the Kalaws.

I was to meet up with Ven Rojas and Camote, the local guide, at 6:30am at the latter's house.  But when I passed his house at around 6:45, he was not there.  Thinking that they were already at the new site, I proceeded to the house of Francis, (Camote's son), who brought me to the new site.  As soon as I parked, I saw Camote on his motorcycle with Ven's distinct Miata (Josephine) following close behind.  Behind ven was a pick up who turned out to be Steve Albano.  After quick hello's, we got our gear and walked to the site.  As soon as we arrived, Francis pointed to an open branch where a Hornbill was perched. And of course, before I could bring up my camera, it flew to another tree where we could only see its head.  It stayed there for about thirty minutes.

Then several of them honked and flew to the opposite cliff  - which is where we were three days prior, (great!).  We settled down to wait, and wait, and wait.  Wins soon arrived with all his gear.  Still we waited.  Soon we were getting bored.  Steve and I were playing on our phones.  Wins and Ven were snoozing. Then we got hungry so we sent Wins' driver to buy lunch.  Other birders arrived and left - first the group of Bimbo Brillo, Raniel Castaneda, and Ed Gapal.  Later it was Edwin Martinez and Romz Lopez.  Still no hornbill. Five hours had already passed and I was getting worried.

Wins' driver came back and we all began to eat. And of course, while we were in the middle of our meal, one hornbill arrived which caused a flurry of movements, lunch boxes were placed on the ground, cameras aimed...at nothing... because the bird stayed behind the leaves.  Meals were resumed but we kept an eye at the balete tree in front us.  I cannot recall how many minutes passed when the bird flew to another perch within the same tree but it was only visible from a lower part of the slope.  This caused another mad scramble as we all looked for a safe shooting perch.  What followed was about two hours of shooting, manuevering, cursing, repositioning, shooting, adjust, shoot again.  My memory card filled up, (twice!).  During a lull in the shooting, I noticed Ven's Chicken Joy lunch on the ground (di ako yung nakatabig ha!).

Sharing some of the images I was able to create. 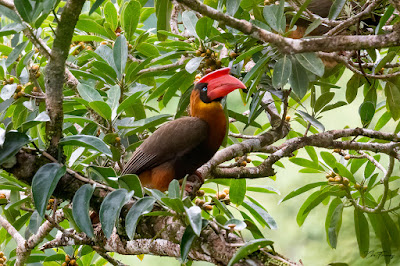 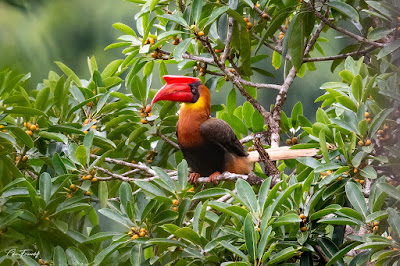 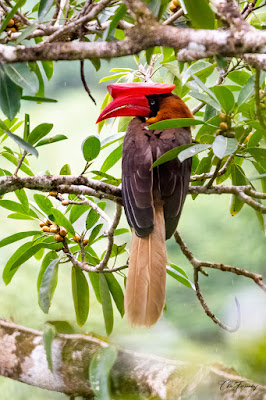 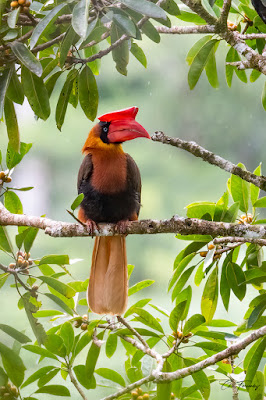 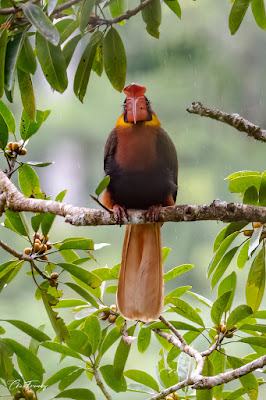 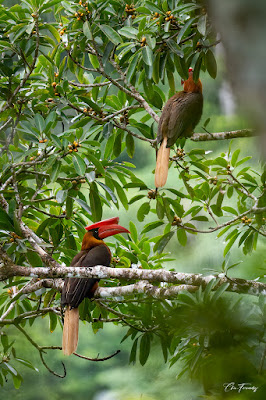 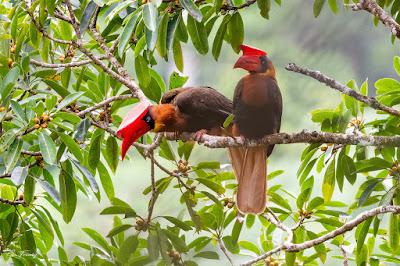 Northern Rufous Hornbill, endemic and endangered.
Thank you Lord for giving us the chance to photograph your beautiful creation.
When I checked my phone, I saw a message from Ed Santos saying that Djop Tabaranza and Maia Tanedo photographed a Cotton Pygmy Goose at the Total Station along NLEX. Looks like we have a new target. When I got home, Lorna's first question was, did you get it? After I said yes, the next thing she said that Teacher Maia got this rare migrant! Guess am going to NLEX soon.

Posted by chinfernandez at 6:49 AM